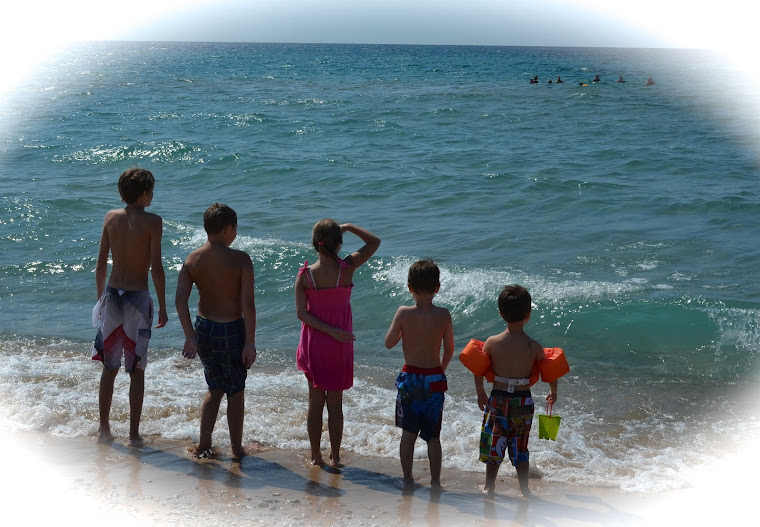 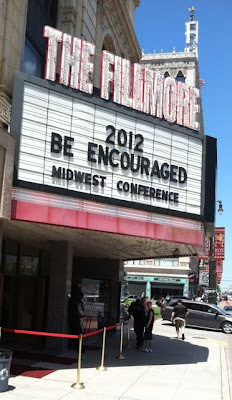 Chuck and I went to a conference today at the Fillmore in Detroit.  The conference was called Be Encouraged (hence the sign).  It really couldn't have been a better conference for this day, this time.

Ecclesiastes 3:1 says ... "There is a time for everything, and a season for every activity under heaven" (NIV)

This morning we rose early to go to the conference.  Chuck doesn't like traffic, so we decided to get up earlier, travel downtown before the rush and get parked and have breakfast at a nearby coney island.

Our plan was going good, until we arrived downtown and tried to find a parking spot.  Parking is expensive in Detroit, especially when there is Tigers game the same day as a conference.  We tried a few lots and we couldn't park there because it was saved for the Tigers game...that's another subject for another day!.

Anyway, we finally parked in a lot a few blocks behind the Fillmore and then off to find the coney island for some breakfast.  We walked and couldn't locate it.  So I looked it up on my phone and called to find out their location.  It was inside of Comerica Park.  REALLY!  I'm hungry and we are downtown at 7:30 AM and not sure what we are going to do....so here we stand at Circus Park looking for something to eat.  We both just looked at each other and said "we should have just stayed home"... it was just that kind of a day (well really it's been that kind of weeks).  Just then we decided we would just hope that there was something to eat inside the Fillmore, and lo and behold...the angels began to sing (not really, but they could have)...we turned around and their was a SUBWAY and it was open.  I had forgotten that they serve breakfast, but at this point who cares, we were starved and patience was growing thin due to the drop in "sugar levels".  So we ate, felt better about our day and we were off to get seated for the conference.

We signed up for this conference just after the District Council in May.  Life wasn't quite as busy, hectic or stressful...and as always we were pumped and ready for anything following District Council services.  But that was certainly not the circumstance during the end of May and beginning of June.  Chuck had taken on a lot responsibility at the church, becoming the interim pastor on May 1st, after our lead pastor retired. We were thrusted into a position that was not familiar to either of us. So today was going to be a much needed day of replenishing the tanks of two very tired  and frustrated people!

Did I expect the morning to run smoothly, traffic to be just perfect, and us arrive on the "high" of one other thing on our already busy calendars....Yep, I sure did!  But I can tell you that the enemy knew what God had in store and if he could keep us from making it to the conference, that would be his plan.

We finally went inside of this magnificent older theater and found it to be filling up, everyone was trying to find just the perfect seat up close and near the speakers.  But I myself like to sit near the rear and feel in control of my surroundings, and noticing the folding chairs and thinking about my back at the end of a day sitting in them, I began to search my options.  Well, just like the breakfast spot, God supplied some comfortable high-top chairs that were at the rear of the arena!  Perfect, and really I do mean perfect.  We sat down and claimed our seats, which to me, were the best in the house!

So time for the conference to begin.  The worship team was awesome!  From the moment the first note was hit, you could feel God's presence.  Both Chuck and I have been working long hard hours.  We work with people all day and after awhile we just need to escape.  This was our escape.  Yes, we were surrounded by people, but all of these people were like-minded and needed to Be Encouraged.

Pastor Jim Cymbala spoke first.  He spoke about how the culture is changing and how the world is moving further from God which is evident in the church today.  Pastors are leaving the ministry at an alarming rate, because they are wore out, tired of fighting the fight.

He talked about our calling and what that is, that it isn't to write books, to teach or to even preach, but our calling is to "be with him".  The same calling of the disciples, that were called to be with Jesus to learn and know his ways, we are called to be with God and spend time with him and learn more about him and to get to know the comforter that he sent on the day of Pentecost.  Pour yourself into learning more about God by being with him and he will pour his love into your life.


No, he wasn't telling us to set our Bible on fire, but as we spend time with God, then He will become our very core, burning into our very souls!

The next speaker was Dr. Tony Evans.  He said that we our told that if we come to Lord Jesus, that it won't rain!  But when you come to Jesus it is going to rain...even storm!  He talked about the foundation that we build upon and the parable of the man who built on the sand and the man who built on the rock.  Both men attended the same church, heard the same sermon, but the difference was not knowledge, but the refusal to apply the biblical truth they heard.  We can't just go to church on Sunday and come home and live our life and repeat next Sunday.  We need to spend time with God allow him to build that foundation upon the rock so that when those storms come, because they will, you can stand. He used this analogy.  Imagine you have a boxing bag and you hit it...again and again...it goes back and forth further and further down with each force, you think it's knocked down....BUT...DING it comes back up!  Just like when we are knocked down, if we have built our foundation on the Rock by spending time with him and building on His truths, he will help us stand the storms of our lives.  Because there will be storms!

One of my favorite sayings by Dr. Evan's for the day was

"God has spoken and He did not stutter"!
He doesn't ponder his decisions, he knows, he makes it and it is done!

Pastor Tim Delina was the final speaker.  He spoke on God as our father and just like kids, we keep asking God the same question.  He talked about his blunders as a young pastor and how he planned and didn't take time to ask his Father if it was his plan.

As children of God we need to ask him, just as young children ask their father.  But remember God is a father and father's say "NO"!  When God says no, it is for your protection.  The enemy will always say "yes".  He doesn't have anything to lose.  As a parent we tell our children no, to protect them.  When God does say NO, it is because he has something better for you.

Something that spoke to my heart is that when things in your life are hard, the enemy will send offers your way.  But I need to remember that God knows best for me.

Jeremiah 29:11 says ...  "For I know the plans I have for you", declares the Lord, "plans to prosper you and not to harm you, plans to give you hope and a future". NIV


The Be Encouraged 2012 conference was a time of encouragement for both Chuck & I.  A time of rest and renewing being those who are like-minded and struggle also, have given us that encouragement to go on once again. We both will remember that storms will come...but as we continue to build our foundation on the truths of God, we will stand in the midst of the storms... that will come!!
Posted by Cheryl at 5:20 PM